With the increase of hardware performance, network bandwidth, and user data, traditional stand-alone applications are being replaced by software systems based on the network.

But while bringing more powerful computing capability, such a software system also introduces complexities that were never found in a stand-alone application. Today, a typical software system can include tens to tens of thousands of modules. Moreover, to make the development and deployment process faster, these modules will be developed by different teams in different languages, which also makes the communication between them more complicated.

At the same time, the business logic has also undergone great changes compared with the past, for example, the promotion of Black Friday will make the system bear several times or even dozens of times the daily pressure. As a result, stress testing is becoming increasingly important, but traditional testing methods are also becoming less and less adaptable.

Using a 1:1 test environment is a very good stress test method in the stand-alone era, but becomes very impractical in the age of the Internet.

The first issue is cost. To test a stand-alone application, the cost of a dedicated testing computer is affordable for an independent developer in most cases; but today’s system requires too many resources, servers, bandwidth, electricity, and server room, the cost of building a 1:1 test environment according to the production environment is beyond the affordability of most companies.

Moreover, because the cost is so high, I don’t think any company can build such a test environment for each development team, that is, all teams must share the same environment. So, if there’s not an excellent coordination mechanism, the tests conducted by different teams will also affect the test results.

Test data is another issue. The test results will not be reliable if the data of the test environment is not close enough to (or even identical with) the production environment. For example, in a Twitter-like system, users like me generally only have a few dozen or hundreds of followers, so it will be fairly easy to notify all my followers in a second when I post a message. But for a celebrity with millions of followers, the situation will be very different. Therefore, we cannot simply use simulated data for testing.

As shown in the diagram below, the blue box is the original business logic, and the orange box is the new logic we need to add, which seems to be just a few if/else, but they are much more complex in practice.

Assuming the system we need to modify is an online shopping system, the process of shopping and placing orders should involve a series of modules such as user, order, and payment.

After the user module, the logic goes to the order module, at this time, we may still want to judge whether the test logic should be taken through the user ID. But a more possible situation may be: the user information is discarded by the series of complex processing, that’s the order module cannot see it.

To distinguish between normal orders and test orders, the user module is required to take some additional steps in the orange box, such as adding annotations to the order. However, in a complex system, it is not easy for the user module to know all the modules that the subsequent process will go through. So we have to spend a lot of effort to ensure the test state is correctly transmitted between modules to avoid disturbing the production logic. And, we also need to consider things like accessing which dataset, mocking a third-party dependency in the orange box.

Very obviously, the workload required for this modification of business logic is proportional to the number of function points. But in addition to this, the more serious problem is that after the hard work, no one can guarantee that all the changes that need to make have been made and were made correctly, and if it happens, the production data will be corrupted.

As can be seen from the analysis above, a full-stack stress test in a dedicated testing environment is both costly and unreliable, while a test in the production environment is both heavy and risky. Therefore, MegaEase believes that a completely new approach must be taken, and the keys of this approach are 3-Consistency and 4-Isolation.

The 3-Consistency are business consistency, data consistency, and resource consistency. That is to say, the test environment and the production environment should be identical, this is a fundamental requirement for getting a reliable result. Realistically, 100% consistency is not always possible, for example, we usually can’t ask a third party to cooperate with us to make a test, and we have to mock the third-party dependency in this case. But we still need to do our best to ensure the consistency of the two environments.

The 4-isolation are business isolation, data isolation, traffic isolation, and resource isolation. These isolations are all designed to completely separate the production and test environment to avoid their mutual impact.

The 3-consistency focuses on the reliability of the test result, while the 4-isolation ensures that the test process does not corrupt the production environment.

Based on these principles, MegaEase implements the Shadow Service feature in EaseMesh. By using this feature, users can easily replica all services in the production environment, and except for a shadow tag, these replicas are the same as the original service, thus ensuring business consistency and business isolation. At the same time, Shadow Service creates a Canary rule automatically which forwards requests with X-Mesh-Shadow: shadow header to the service replica and other requests to the original service for traffic isolation.

For data isolation, Shadow Service can replace the connection information of various middleware (including MySQL, Kafka, Redis, etc.) according to the configuration, and change the destination of data requests, while users can make a copy of the production data as test data to ensure data consistency.

Resource consistency and resource isolation mean that the test environment should use resources of the same specification as the production environment, but should not share the same set of resources. Resources are regarding hardware in these two phrases, but Kubernetes has given a very good answer at the software level, and EaseMesh is built on top of Kubernetes, so by deploying the replica of the service into a new POD, resource consistency and resource isolation are guaranteed.

The system is deployed into Kubernetes via EaseMesh, during the deployment process, EaseMesh injects SideCar (Easegress-based) and JavaAgent (EaseAgent-based) into the application’s POD, thereby hijacking the HTTP requests and data requests issued by the application, achieving the 3-consistency and 4-isolation we have mentioned earlier. Below is the architecture of the system. 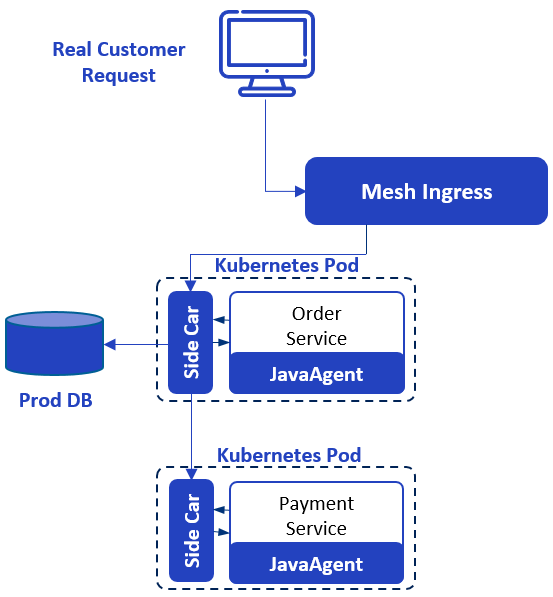 To test it, we need to first create a copy of the database. This step can be done through the backup and recovery function of MySQL. Because both data copies are in the same security domain, it is no need to desensitize the data. 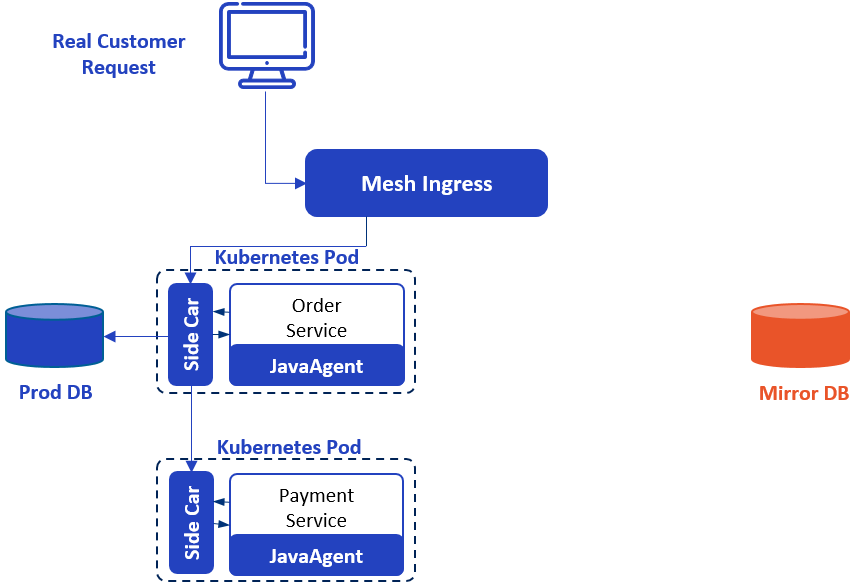 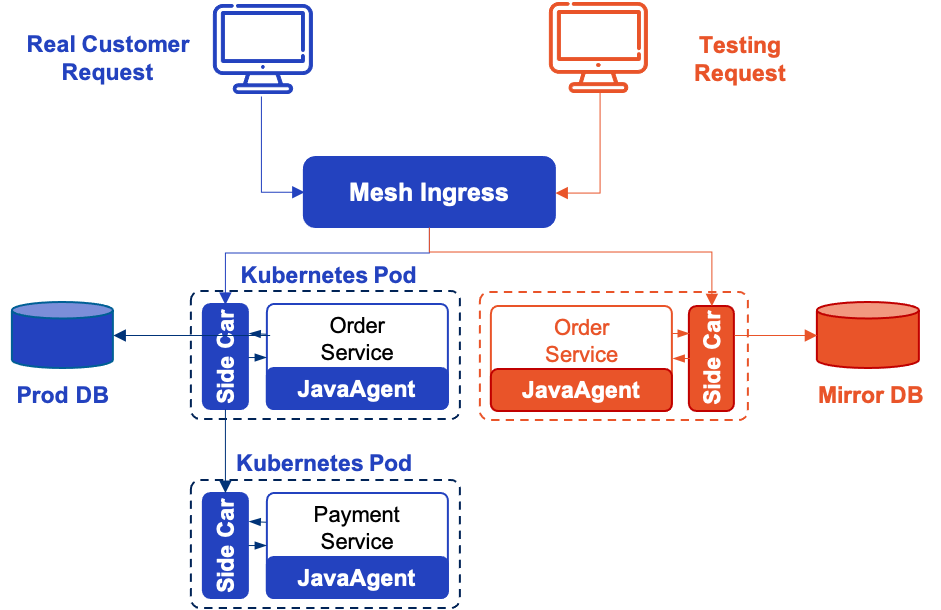 This completes the creation of the test system, to which we can send a request with an X-Mesh-Shadow: shadow header for stress testing. The final system architecture looks like below. 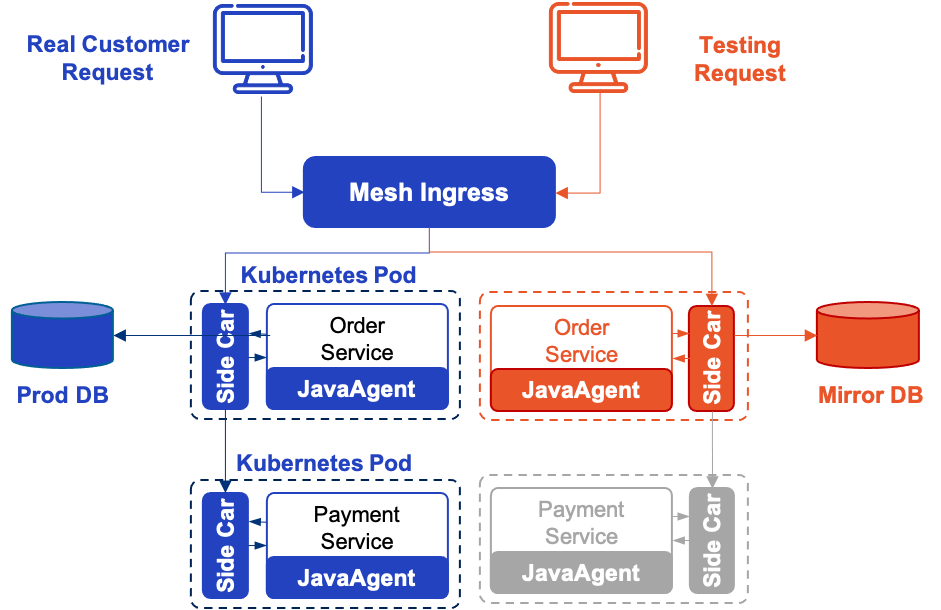 4.3 The Elegant of Shadow Service

Finally, welcome to download and install EaseMesh product and try out the Shadow Service feature.